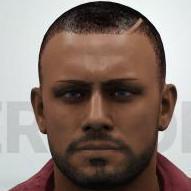 oh okay. and man doing that nitro stage is a bitch to do. i've seen like 3 people try to do it like you did but the top of the "C" logo was cut off. lol i'll wait on yours as it is perfect. thanks for